Digital Body Language: How to Build Trust and Connection, No Matter the Distance

Email replies that show up a week later. Video chats full of “oops sorry no you go” and “can you hear me?!” Ambiguous text-messages. Weird punctuation you can’t make heads or tails of. Is it any wonder communication takes us so much time and effort to figure out? How did we lose our innate capacity to understand each other?

Humans rely on body language to connect and build trust, but with most of our communication happening from behind a screen, traditional body language signals are no longer visible — or are they? In Digital Body Language, Erica Dhawan, a go-to thought leader on collaboration and a passionate communication junkie, combines cutting edge research with engaging storytelling to decode the new signals and cues that have replaced traditional body language across genders, generations, and culture. In real life, we lean in, uncross our arms, smile, nod and make eye contact to show we listen and care. Online, reading carefully is the new listening. Writing clearly is the new empathy. And a phone or video call is worth a thousand emails.

Digital Body Language will turn your daily misunderstandings into a set of collectively understood laws that foster connection, no matter the distance. Dhawan investigates a wide array of exchanges―from large conferences and video meetings to daily emails, texts, IMs, and conference calls―and offers insights and solutions to build trust and clarity to anyone in our ever changing world. 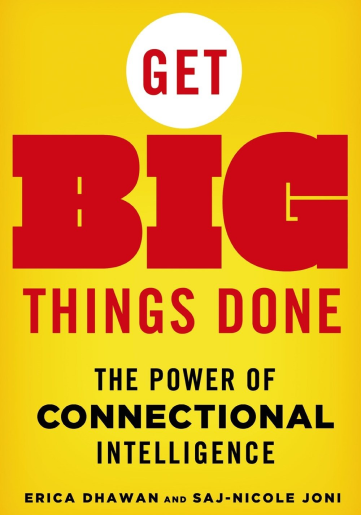 Get Big Things Done: The Power of Connectional Intelligence

Connectional Intelligence unlocks the 21st-century secret to getting “big things done,” regardless of who you are, where you live, or what you do.

We typically associate success and leadership with smarts, passion and luck. But in today’s hypercompetitive world, even those gifts aren’t enough. Get Big Things Done argues that the game changer is a thoroughly modern skill called Connectional Intelligence. Virtually anyone can maximize his or her potential, and achieve breakthrough performance, by developing this crucial ability.

Can a small-town pumpkin grower affect the global food crisis? A Fortune 500 executive change her company’s outdated culture through video storytelling? A hip-hop artist launch an international happiness movement? Or a scientist use virtual reality games to lower pain for burn victims? The answer, you’ll read, is a resounding yes. Each of these individuals is using Connectional Intelligence to become a power player to get big things done.

Erica Dhawan and Saj-nicole Joni’s Get Big Things Done unlocks the secrets of how the world’s movers and shakers use Connectional Intelligence to achieve their personal and professional goals–no matter how ambitious.

WORK IS TOO COMPLICATED. INNOVATION IS TOO SLOW.

Email erica@cotentialgroup.com to get started